Jack Francis is one of YouTube’s biggest upcoming personalities. His unique combination of model-like looks and his heavily tattooed skin has enabled him to charm his way to a loyal Instagram following of over 110,000. Despite only launching his YouTube channel recently, the 21-year-old model turned content creator, has already had huge success within the platform. Jack has been able to express his comedic and likeable personality whilst spreading awareness of Tourette’s Syndrome, a neurological condition which he suffers from, causing twitches, shouting and the use of inappropriate language. In only a few months Jack has managed to gain over 90,000 subscribers and is well on his way to becoming YouTube and the modelling industries’ next big thing.

I caught up with Jack for the first time to get to know a bit about him. We had a very laid back, open and honest conversation about life with Tourette’s, giving an insight into the mind of someone who despite suffering from an obvious boundary, has been able to stay positive, inspire others, and achieve so much, with no signs of slowing down in the future.

or back to looking like 2017 jack.. my outfit is @fashionnovamen

So Jack, how was school for you?

?JF: School was really shit. I was never bullied though as I was really confident… if anyone ever said anything bad to me about my Tourette’s, I would just tell them to fuck off! So I stood up for myself. I was always confident. The reason I didn’t like school was that I found it really hard to concentrate with my tics. With Tourette’s it’s not just tics and twitches, there is also a lot going on in your head. I don’t really know how to explain that…

So kind of like you are preoccupied all the time?

?JF: Yeah, it’s very hard to concentrate. I didn’t do amazingly well in school, but I got my GCSE’s.

What did you study?

?JF: I went to college to study music. I play the drums, so I did that for 3 months but I struggled. So I quit college. At the time I smoked cannabis, which didn’t help and isn’t good for people with conditions such as mine.

So, where did you go from there… into a job?

?JF: I have never been able to work a normal job due to my Tourette’s. I’d love to though… I love money! I always wanted to be a police officer growing up, but obviously, a police officer walking down the street shouting C**T isn’t really going to work is it?

So you got into modeling… was it something you always wanted to do?

?JF: Yeah it was. I was always being told by family and friends ‘why don’t you try and get into modeling?’ But I never really thought about it seriously until about 6 months before I was approached by D1. I applied to some agencies before, and they all said no!

When you applied, did they know about your Tourette’s? 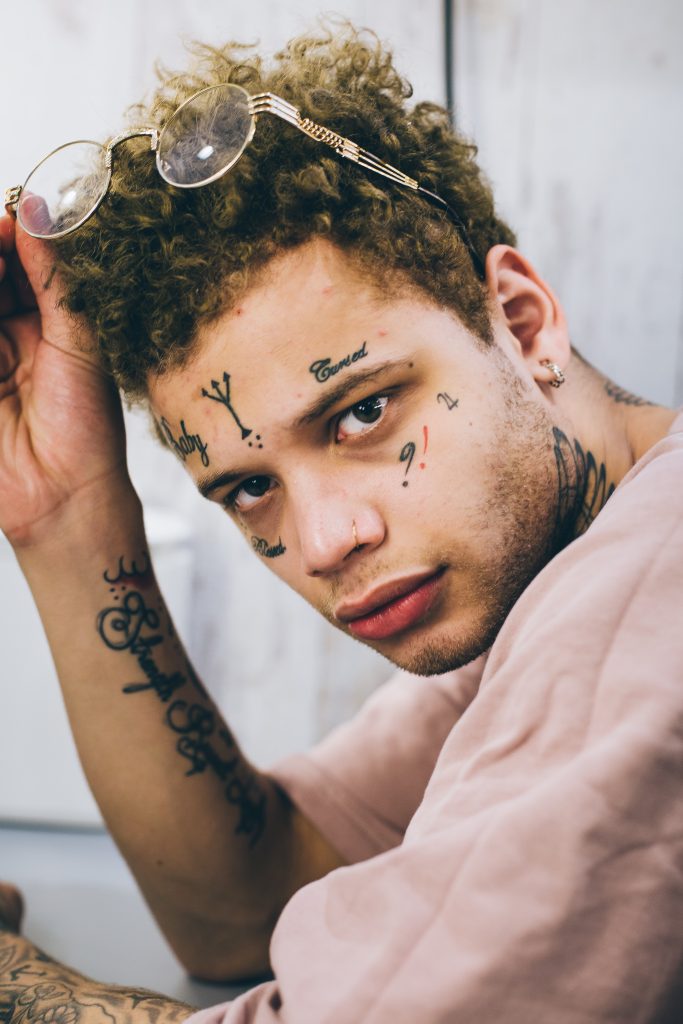 So potentially, they only turned you away because of your Tourette’s?

That’s interesting, you wouldn’t think that would play a part in it. But it worked out in the end, you got scouted via Instagram, right?

?JF: Yeah, I got scouted through Instagram by the CEO of D1 models. He messaged me asking about my height and if I would be interested in modelling and it went from there. I did some test shoots and editorials, a couple of private shoots but I never did a paid shoot through D1.

Are you still with them now?

?JF: No. The reason I left was because I was finding it really hard travelling on public transport. As you can imagine, with Tourette’s, it is a pain in the arse!

How is it going since you left and decided to do your own thing?

?JF: It’s all going really well. Modelling is going well, my YouTube is going well. My head is in a better place now that I’m out of that whole modelling scene.

You are doing what you want now and you have freedom, right?

?JF: Yeah. I’m not doing anything for free now!

What brands have you worked with?

?JF: Annie Hood, Death Valley, Topman, New Look… there has been a few…

If you could choose a brand or company for Jack Francis to be the face of, who would it be?

?JF: That’s a really good question! It would have to be Tyler, the Creator’s brand, Golf Wang. Maybe, Vogue. That would be fucking sick! Imagine me being the front cover of Vogue! Maybe Jaden Smith’s brand, MSFTS.

The industry is definitely becoming more accessible, I mean, you have that guy, what’s his name… Jeremy Meeks, who was in prison and everyone was saying he should model, and now he is the face of Phillip Plein! You also have Winnie Harlow, the model with the skin condition vitiligo. It’s now starting to be accepted that people are different, and it’s becoming desirable! Brands want people who are unique to be the face of their campaigns and runway shows!

I think that is something that you portray in your videos, that people with disabilities can achieve these things. Your confidence comes across so much.

?JF: Thanks. I like to try to inspire people as much as I can.

Is that what made you venture into YouTube, to inspire people and spread awareness?

?JF: The main reason was to spread awareness about the condition and other disabilities which are similar, like autism. And… obviously, the money helps! But, I want to be famous. I want someone in Africa to say ‘Oh, you know Jack Francis?’ and their friend to say ‘Yeah, the guy with tattoos and Tourette’s!’ Ever since I was young I wanted to be famous.

?JF: I think I was worried when my followers on Instagram didn’t know I had Tourette’s. But with YouTube, I didn’t think I would have a problem at all. I have a lot of support and I always knew it would go quite well.

I was going to mention your tattoos, but you have talked about them a lot on your YouTube. Do you find it annoying with people constantly asking the inspirations behind them?

?JF: People like to know I suppose. The majority don’t mean anything, I have my brother’s name and my facial tattoos which have meaning. The rest don’t.

So you just like the look of the tattoos?

?JF: Yeah, they are art. I love how when you get a tattoo you know it will be there for the rest of your life. I love the fact they are permanent. 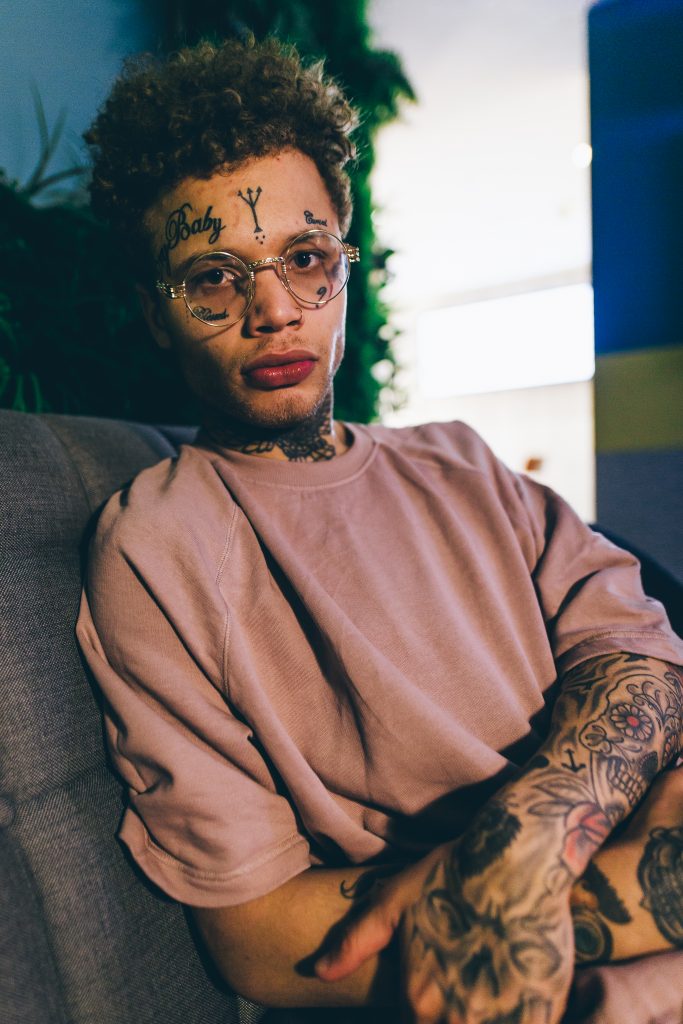 Yeah, I mean they are one of they only things you can buy which will last your whole life… I make up a different story to explain my tattoos to each person that asks!

Where do you see yourself in 5 years, Jack? Do you have goals or is it go with it and see where you end up?

?JF: I have goals, but they sound big headed.

What that says to me is that you want freedom?

?JF: Yeah, I want to be able to wake up and say to my girlfriend ‘Let’s go to Milan today’

Who are your favourite YouTubers and people you follow on social media?

?JF: To be honest, I usually only follow my friends or people with photos I actually want to see. I like flicking through my page though!

?JF: Be yourself. It sounds cheesy but literally be yourself and keep your content consistent, give the people what they want to see.

Finally Jack, does Tourette’s come with having any perks?

?JF: It does actually, I get to swear at anyone I want and I can skip the queues at theme parks! I don’t even queue, I go straight through the exit!